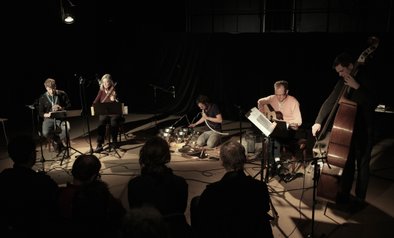 This project was   about  creating   both a solo piece and compositions for ensemble. The idea was to write  pieces open to varying instrumentations and number of players.   This created a process of thinking about how to combine the individual process of the musician with the process of an ensemble, and resulted in a number of   compositions, some of them being more like methods or rules for improvising, some more traditionally notated, with a total length of approximately  60 minutes.

To  perform the  ensemble  pieces at the   premiere (Fylkingen, Stockholm 2012) a quintet consisting  of some of the finest musicians in the Stockholm scene of improvisors was put together.

After the premiere of JAAS++ the group continued performing the pieces and free improvisations under the name Jaas.

During the project I also created a video presenting a number of drawings (coal on a single paper) for a melodic  piece, Fågel,  that distinguishes itself from the main approach of the musical  work in JAA++